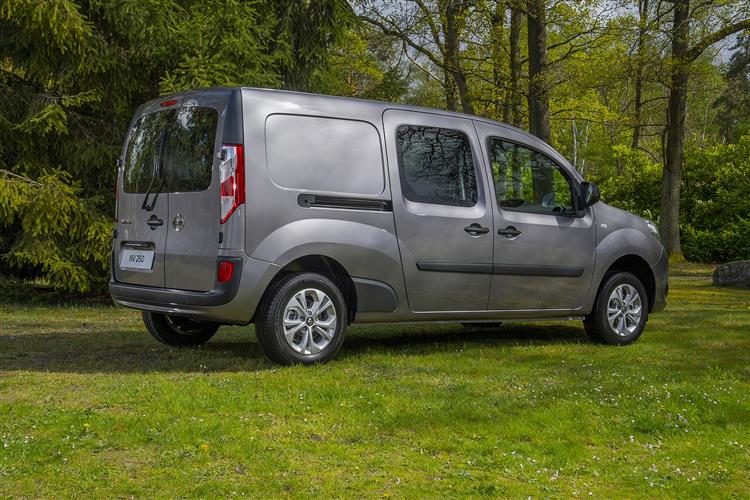 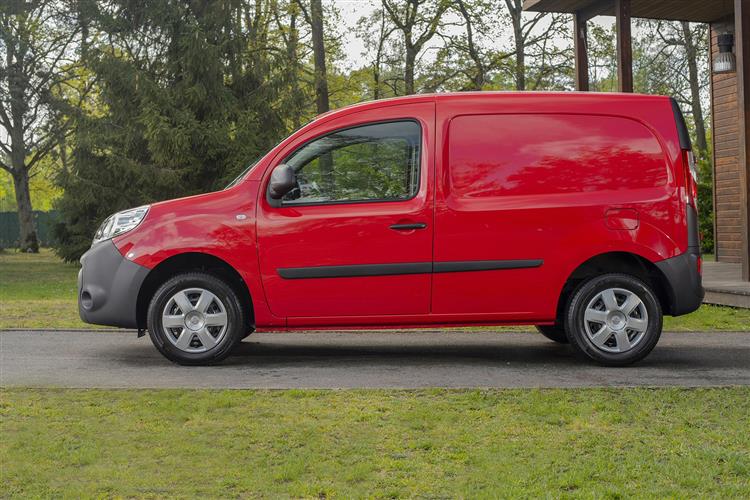 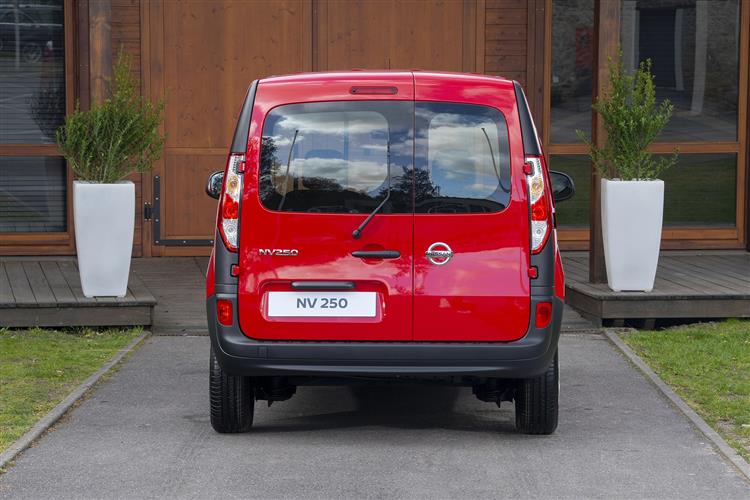 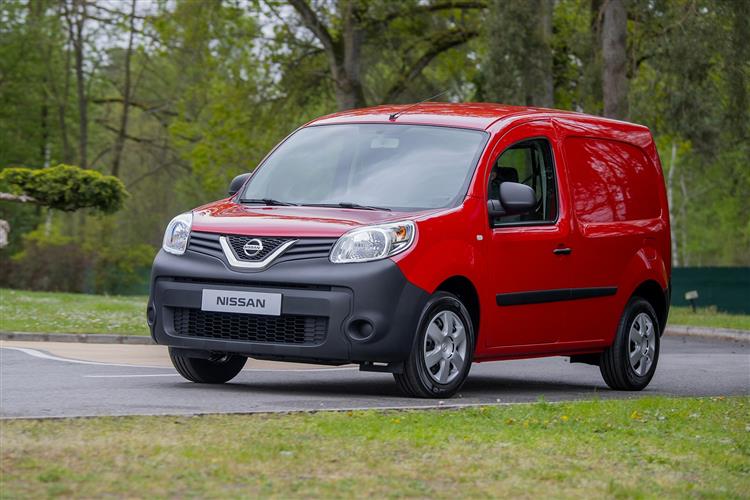 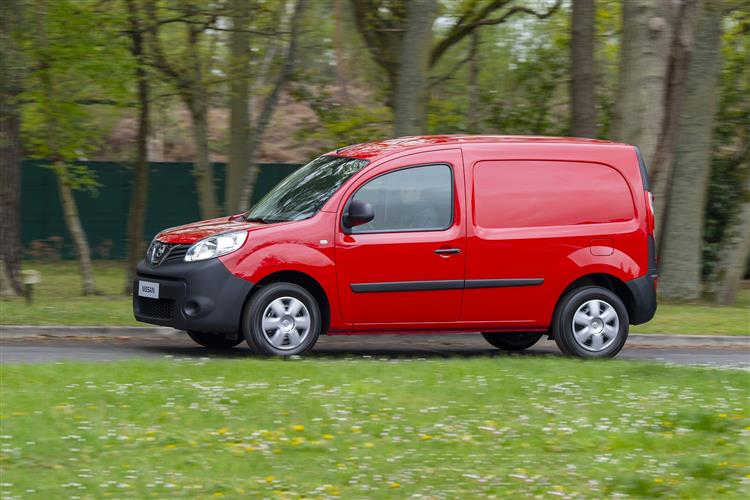 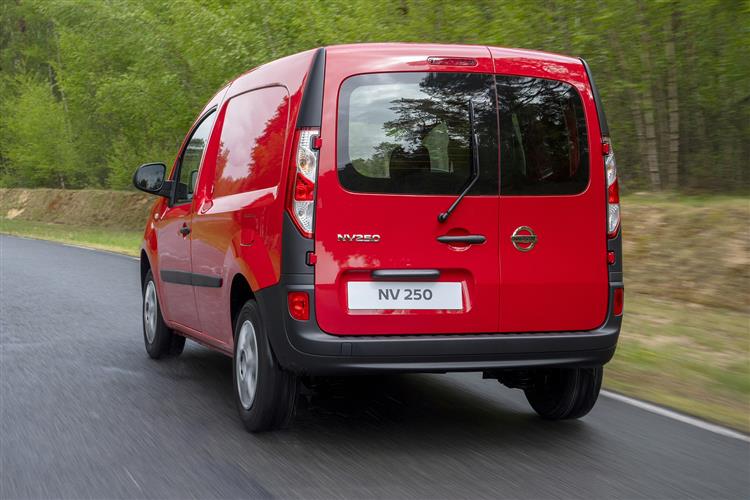 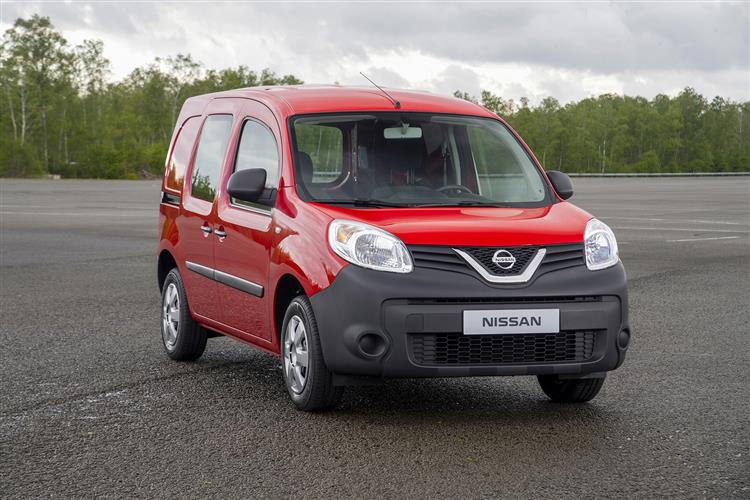 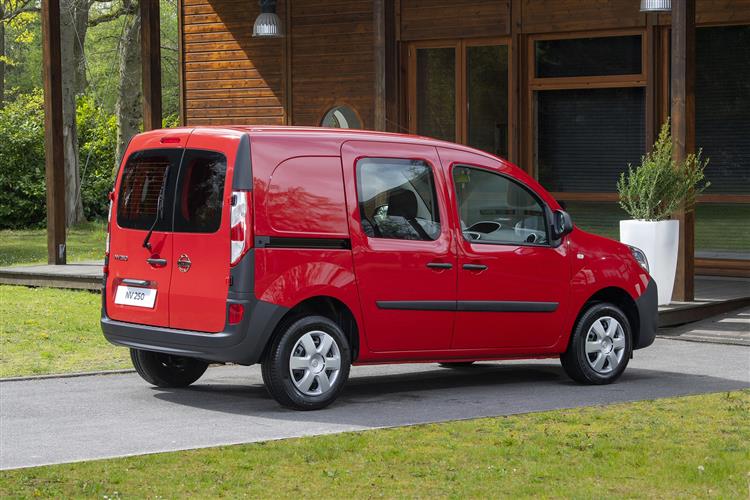 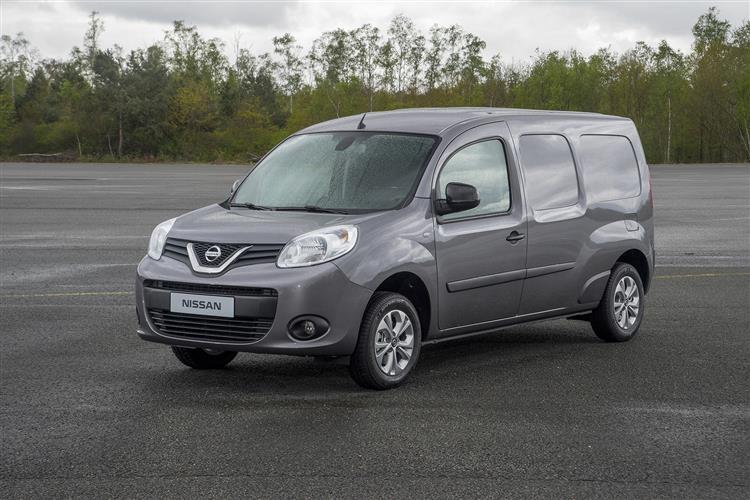 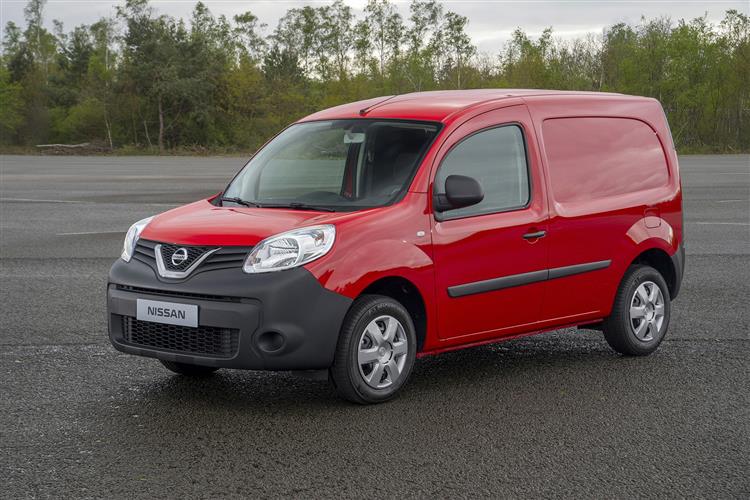 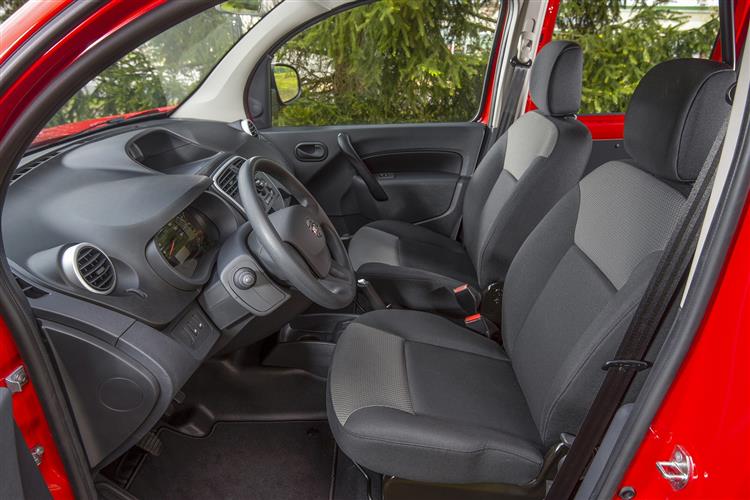 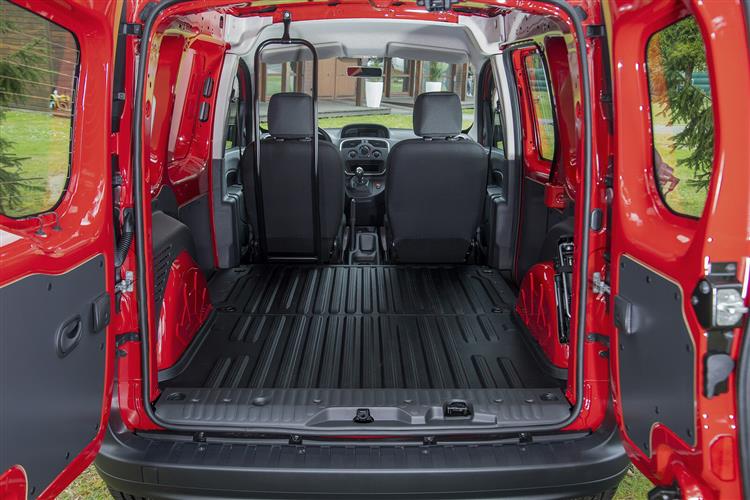 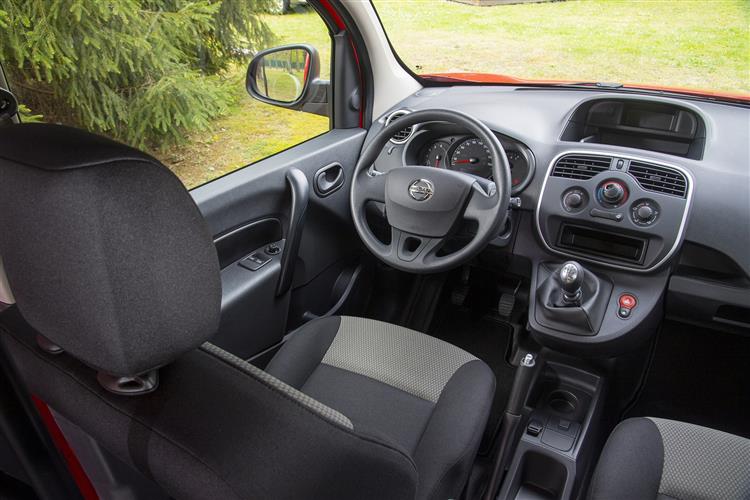 Operators of small vans don't care about the provenance of the designs they're presented with: only whether they're competitively priced, practically-shaped, capable of carrying stout loads and come supported by a peace of mind warranty. Nissan's NV250 seems to tick quite a few of those boxes.

Nissan shares its commercial vehicle designs with Renault - with one exception, the compact NV200 model, now available only in full-electric form. Until mid-2019, that LCV could be had with a diesel engine too but Nissan baulked at the cost of having to update this model's black pump-fuelled unit to the latest Euro6d-TEMP emission regulations and also needed a compact model that was available in a greater number of body styles and was more compatible for conversion. The solution was obvious; namely to do what Nissan does with its mid-sized and large vans and simply re-badge an existing Renault product, in this case the Kangoo. The current Renault Kangoo is a second generation design that's been on sale since way back in 2010 and the French brand has already revealed a concept design for its replacement. But Nissan decided it couldn't wait for that, so has pressed ahead with a light visual re-working of that Renault's front end and created this NV250 model to slot in as the starting point in its LCV range.

The NV250 does of course share all its engines with its Renault Kangoo donor model. There are only engines: Nissan hasn't taken the Kangoo's full-electric Z.E. powertrain because it's continuing to sell the NV200 in full-electric form. So NV250 buyers must have diesel power, refined to the Euro6d-TEMP regulations that the old black pump-fuelled NV200 model couldn't meet. There are three 1.5-litre dCi options, with outputs of 80, 95 and 115hp: that's for the panel van. The Crew Van version drops the least powerful of these three units. The underpinnings here were originally derived from Renault's Scenic MPV and these origins can be felt out on the road. The ride is more compliant and forgiving over the worst surface imperfections than we've come to expect in a compact van but the flipside is that body-control can be slightly wayward if you should press into corners with undue vigour. The longer wheelbase of the L2 variant helps it provide a more composed ride and handling package than the shorter L1 option, which bounces around a little more. On the downside, the turning circle increases with the extra length but most drivers will hardly notice, the NV250 always feeling manoeuvrable for its size. All models have great forward visibility courtesy of the extensive windscreen and truncated bonnet, while the well-weighted steering and positive gear change also impress.

Aware that the NV250's lifespan will probably be quite short, Nissan hasn't gone to great lengths to visually differentiate this model from its Kangoo cousin: even the headlights are the same. Between them is a Nissan V-shaped front grille. Inside, it is of course virtually the same as that Renault too, apart from the Nissan badge on the steering wheel. There's an MPV-like feel to the interior that'll please those who like to use their LCVs as a mobile office. To that end, a good quota of storage options are provided, with large door pockets, an A4-sized compartment in the dashboard complete with pen holders and a 13-litre overhead shelf. The basic dashboard design is user-friendly, with its aviation-style handbrake designed to minimise strain on the wrist and a dash-mounted gear lever. The upright driving position also facilitates easy entries and exits. An enormous amount of headroom is present in the front of the NV250, enough so that all kinds of elaborate headgear could be accommodated should the occasion arise. And there's the option of either two or three-seat cab layouts, with only passenger legroom (slightly restricted by the sloping floor) giving any cause for concern. If you need to carry more than two passengers, then it's worth checking out the Crew Van variant.

There are two NV250 panel van body lengths - L1 and L2, the latter also available in Crew Van form with a second fold-out seating row. The L1 is your only option if you want the base 80hp version of the dCi diesel engine, which prices from around £17,000 ex VAT and can only be had with 'Visia' or 'Acenta' trims. To these two spec options, all other variants also add a third top 'Tekna' trim level. There's only manual transmission on offer. And the Crew Van variant requires a price premium of around £900 over the equivalent panel van. Overall, you've to think in terms of a spend of around £19,000 for a typical mid-range 'Acenta'-trimmed L2 panel van version of this LCV. You'll probably want 'Acenta' trim because base 'Visia'-spec, predictably, gives you only the very basics. 'Acenta' trim adds air conditioning, front fog lights, rear parking sensors, an on-board trip computer, driver's seat height adjustment, a one-touch feature for the powered front windows, a rubber mat for the load compartment and power-folding mirrors. Key options include an offside sliding door (standard on the L2). And a swivelling bulkhead and foldable passenger seat for longer loads.

The main point of access to the cargo area in the NV250 is the asymmetrically-split rear doors. These open to a 90 degree angle but releasing a catch inside allows them to swing out to 180 degrees. A sliding side door is also included and this opens to reveal a 635mm aperture with a tug on the reassuringly chunky handle. An extra sliding side door is fitted to the L2 and optional on the L1. There are various bulkhead options including a mesh grill that swings open to increase the payload capacity. Up to eight load lashing points are provided for the securing of cargo. Payloads are 650kgs for the L1 and 800kg for the L2, the latter figure 50kgs more than the old NV200 diesel could manage. Cargo volume measures up to 3.5m3 in the L1 (extendable further via an optional through-loading bulkhead) - or 4.6m3 for the L2. That L2 figure compares to 4.2m3 for the old diesel NV200. The NV250's loading length is 1.73m for the L1 and 2.11m for the L2, but you can extend those figures to 2.5m and 2.87m respectively by fitting that through-loading bulkhead. The Crew Van (offered in L2 form only) has a 740kg payload and cargo volumes of 2.4-3.6m3, depending on the position of the rear seat. Fuel consumption is NEDC-rated at around 62mpg on the combined cycle and the NEDC CO2 figure varies between 117-122g/km, depending on engine. A key differentiating factor over the Kangoo is this Nissan's five year / 100,000 mile warranty.

There's nothing too complicated about the proposition here: you get all the benefits of a Renault Kangoo (economical running costs, a practical interior and so on) with the additional bonus of the five year / 100,000 mile warranty that Renault can't offer. The design here may be a decade old but it still manages provide one of the more comfortable and manoeuvrable options in the compact van class. The soft suspension means handling isn't as sharp as in some of the alternatives and the engines major in economy rather than performance. Still, capacity and payload figures are competitive. Which is what Nissan needed to be in the small van sector. The NV2500 delivers that capability.

Fill out the simple form below to get a quote for this NISSAN NV250 L2 DIESEL 1.5 dCi 115ps Visia Crew Van lease.