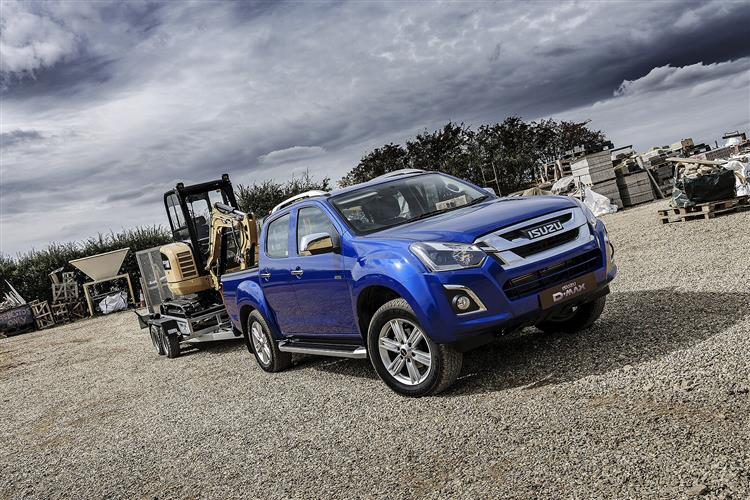 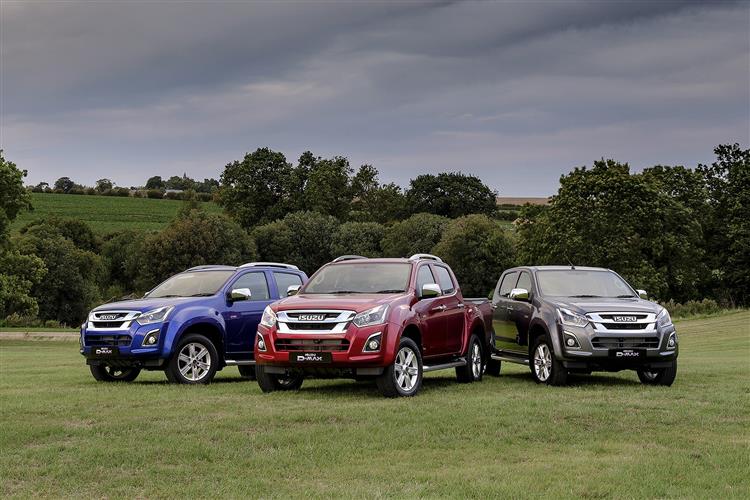 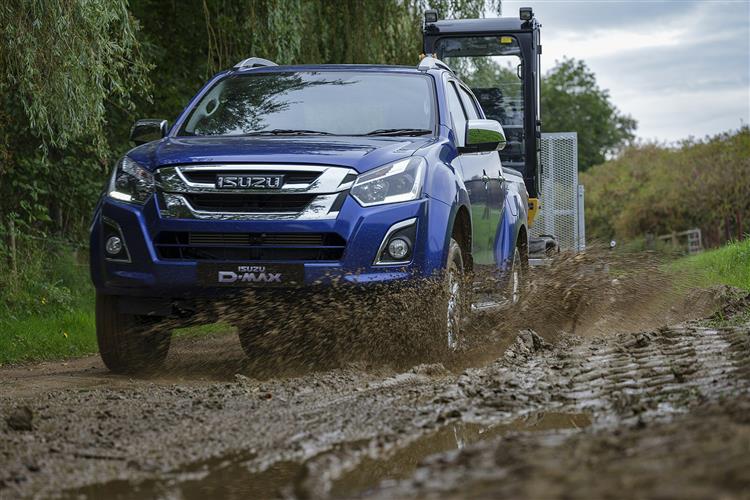 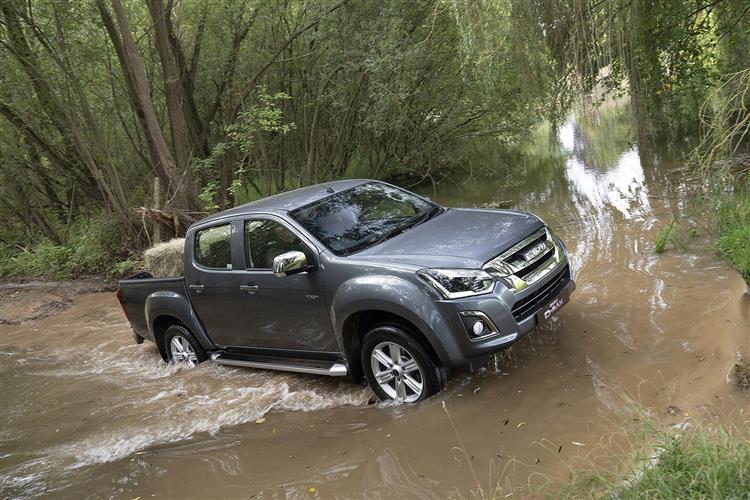 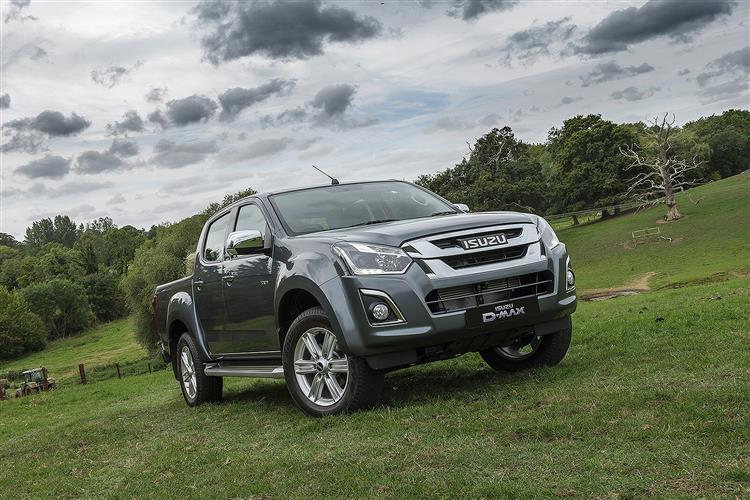 With this improved D-Max, Isuzu has become a more competitive contender in the growing UK pick-up sector. It gets revised suspension, a slightly higher payload, an improved interior and standard Trailer Sway Control. As before, there's an efficient 1.9-litre turbo diesel engine that can haul and tow hefty loads through the wildest terrain you're likely to come across. Plus as ever, there are three bodystyles to suit a wide range of buyers. Smart, tough and affordable, it looks set to do very well.

Within the confines of the kind of vehicle a tough pick-up can be, Isuzu's D-Max represented a huge dynamic step forward for its brand when it was first launched back in 2012. The vehicle's only major achilles heel back then was its engine, a relatively inefficient old-tech 2.5-litre diesel unit. So the Japanese brand moved to improve things, replacing this powerplant in 2017 with a new 1.9-litre diesel that though less torquey, was much cleaner and more frugal. It's since built upon that update with a more advanced 3-piece leaf-sprung suspension system and a useful package of detail updates. Rival pick-up models can match this D-Max model's running cost figures, but too often, they're tucked away in the corner of a sales showroom really dedicated to selling passenger cars. Will such a place really support a dedicated pick-up person when they really need it? And will the vehicle in question really be as capable in the Serengeti as it is in Surbiton? With this D-Max, you know you've little to worry about on either score. With Isuzu, it was always that way. It's just that with this model, there's a little more polish with the product on offer. Let's check it out..

The major change made here is the way that the Double cab variant's suspension has changed from a 5 piece to a 3-piece leaf spring suspension for improved ride comfort and reduced noise levels. Otherwise, it's much as you were. Pulling power is the first thing you notice about this D-Max once out on the road. Though the single diesel engine on offer is relatively small for such a beefy pick-up (1.9-litres in size), the power output (164PS) is quite sufficient and there's a willing 360Nm torque output. That kind of grunt makes low speed urban work easy and tough muddy inclines straightforward. It's also a major reason why this vehicle can tow a braked trailer of up to 3.5-tonnes - usefully more than an equivalent Fiat Fullback or Mitsubishi L200. Trailer Sway Control is now standard. For wet or icy tarmac or light off piste work, you can take the opportunity, at up to 60mph, to twist the centre console dial and select high range all-wheel drive. It takes a second or so for the front wheels to engage but when they do, the D-Max feels notably more sure-footed on the slippery stuff. Of course, once in a while, you'll need to do more, occasions on which you'll be further twisting this dial to engage the full low-range four wheel drive mode, something that can only happen when the vehicle's stopped. In this mode, you really do get an incredibly accomplished off roader, aided by a well chosen first gear ratio that's an ideal 'crawler gear' over rough terrain on which you'll appreciate ground clearance that at 235mm is much higher than you get with most other rival pick-ups.

Styling was one of the things buyers always liked about the D-Max, so Isuzu hasn't changed it much in recent years. This means that the same rakish, wedgy styling has been retained, a shape that's supposed to look 'tough, poised and ready for work'. The large front grille is decorated with daytime running lights and flows into an A-pillar that's set at an acute angle leading to the relatively low roofline. At the rear, you'll find a set of large tail lamps, which feature LEDs on higher-specification models. Climb inside this improved model and if you were familiar with earlier versions of this design, you might notice that Isuzu has updated things a bit, adding soft pad inserts to the arm rests, binnacle and utility box lid. Gloss black trim has been added to the window switches, air vents and glove box, which also incorporates smart D-Max badge. As before, there are wide-opening doors, and you're greeted by an interior that's hard-wearing and cleanly styled. Plusher models feature a revised range of touchscreen entertainment systems equipped with Apple CarPlay and Android Auto systems, so you can mirror in your smartphone. The back seat is more comfortable than you might expect it to be, thanks to a long wheelbase that facilitates decent head, leg and shoulder room. Plus the seat back isn't as vertically inclined as it is on some pick-ups, so you get greater comfort on longer journeys. One nice touch is the way that 60/40 split-folding rear seats enable you to more flexibly use this rear passenger space for packages, should you so wish. Additional storage compartments in the floor under the rear-seat base are also useful for keeping things out of harm's way.

The key news here is that a 10kg drop in kerb weight has resulted in a payload increase of 10kgs. On to the loading practicalities, which we'll base around the double cab variant that most UK customers will want. At around 5.3m long, this is certainly a pretty large vehicle, so you won't be surprised to flip down the sturdy drop-down tailgate (which can only retract to horizontal level because of the chunky bumper) and find a pretty substantial cargo area on offer. You'll find a space 1485mm long, 1530mm wide and 465mm in depth easily big enough for a euro pallet which can slide in the 1110mm-wide space between the wheelarches. You get a five-year / 125,000-mile transferable warranty which helps beef up those residuals and reinforces the reputation for durability and ruggedness for which Isuzu pick-ups have become renowned. Not that you're likely to need it. In development, this design underwent over four million kilometres of endurance testing, the equivalent of 100 times round the world. There's also three years of roadside recovery and assistance, a three-year paint warranty and six years of anti-corrosion cover. What else? The new 1.9-litre engine meets Euro 6 standards without the need for addition of AdBlue and its CO2 return is 163g/km - comparing well with the 192g/km figure of the old 2.5-litre unit. Servicing is every 12,000 miles or 24 months. And around 35mpg should be possible on the combined fuel economy cycle.

If you thought Isuzu pick-ups were a bit rough and ready, it's about time you gave the D-Max a try. Once, this brand was really one reserved for the requirements of pure commercial operators. These days though, it'll also suit private buyers looking for an all-terrain utility vehicle that can play the lifestyle card. But how does it stack up in what's becoming quite a crowded market? Very well actually. Pricewise, it's one of the best value choices in the class and now that a more competitive engine has been inserted beneath the bonnet, it's now a reasonable performer on the balance sheet too. We think it'll suit the sort of buyer who would previously have automatically looked to a Nissan NP300 Navara or a Toyota Hilux. The sort of person who might not be considering this D-Max. But probably should be.

Fill out the simple form below to get a quote for this ISUZU D-MAX DIESEL 1.9 Utah Double Cab 4x4 lease.